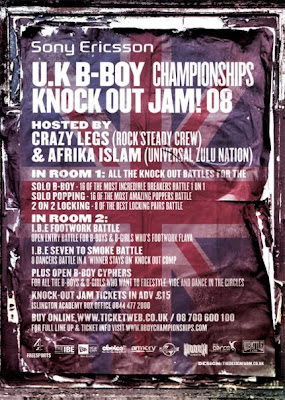 This Saturday I went to a jam – no, this isn’t something you spread on your toast (dum-dum), a ‘jam’ is a dance event. This jam is the UK B-Boy Championships, a global breakdance competition that has been running since 1996. Qualifiers are held in each country and the best dancers go through to the world finals in London. There are team battles, solo battles, popping battles and locking battles. ‘Popping’ and ‘locking’ are different dances from breaking (or ‘b-boying’) which are now considered party of hip-hop culture, but that’s another story.

The finals are a two-day event with a ‘warm-up jam’ or ‘pre-final’ on the Saturday and the actual finals on the Sunday. I went to the Saturday event because (a) I don’t have the time and money for both; and (b) the finals is more about watching the dancing, rather than doing it!

I spent most of my time watching the ‘footwork battles’ in one of the two rooms – these battles focus on techniques done on the floor which don’t involve dynamic power moves such as headspins, backspins and so forth. It’s a real test of skill and style, as you have to have as many combinations as possible and to avoid repeating any moves.

In between the battles the DJ plays music while everyone spends time drinking, talking and dancing. People form circles on the dance floor, which B-Boys and B-Girls called ‘cyphers’ (I have no idea where the name comes from). People take turns dancing in the cyphers while everyone else watches (see video above). Understandably, this can be a little nerve wracking, especially when there are some really, really dope B-Boys and B-Girls going in before you! At the same time it’s a chance to show your style, to be appreciated and to appreciate others. It also inspires you to practice and you may even see some new moves you’d never thought of before!

The winning team on the final on Sunday were Top 9, a Russian crew who has been coming up in recent years. Last year they came second to T.I.P, a Korean crew. The winner of the solo battles was B-Boy Kosto, also from Top 9 crew! The winner of the popping competition was Gucchon from Japan, and the locking winners were Lock and Lol from Korea.

Check out the freebie – the Sony Ericsson reps were handing out fat laces all night: marketing genius! 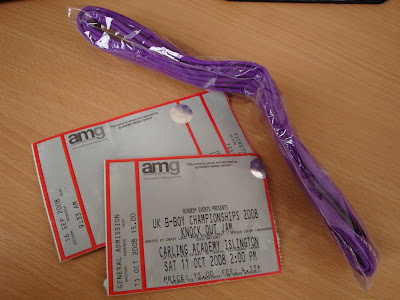 To watch more videos from the event, visit the youtube channel here.
Posted by Cambridge University Breakin' Club at 12:44